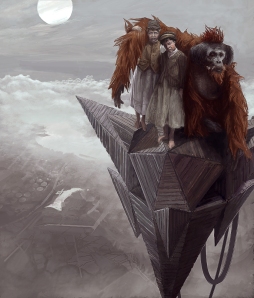 In the early 19th century, the fortunes of the City of Manchester are on the up. Unfortunately, the same cannot be said for its mill-working chillun’. These here two misfortunates have managed to slap together a zero-G rig in the style of a Wenzel Jamnitzer Polyhedron. As a companion, they have a male orangutan in whiteface named Jupiter whom, during their escape, they thoughtfully liberated from the Mill-Overseer’s private menagerie. Together,  they cruise the outlands of The Industrial North, raiding mills and generally smashing the system. I think this is probably a poster for a theatrical production rather than a cover. 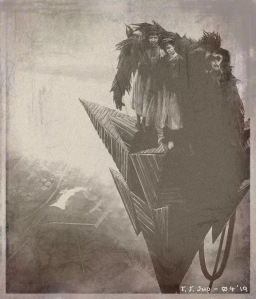