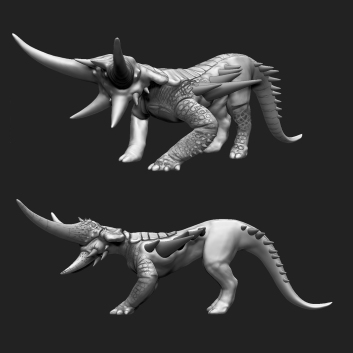 This is a tricky one. I’ve looked at many tutorials on the subject of creature design over the years, but I’ve never encountered one which even touched on the concept of composition in organic forms. What makes one form/series complement another to form a harmonious whole? We can leave out colour, as colour schemes can only be built upon form. Yes, there are primary, secondary and tertiary forms, but there can be more than one series of each of these, a fact which complicates the issue no end.

The spikes are the primaries here, of course. They kind of half-segue into the back ridges, which are also very important. Normally it is easy to create a reticulated pattern on a field and to have it read as organic, as there are many ways to introduce variety – depth, size, shape etc. The problem with the scute arrangement of an armadillo is that the folds of skin which contain it are regular, creating a kind of grid pattern. A grid pattern must be handled with exteme care if it is to convey an organic substance. Even speaking of composition alone – it is more than a field of information which simple wrinkles or pores are, and taken as a whole could be seen as another primary form.

This is a breakdown of my attempt to keep fluid and changeable as many elements as possible for as long as possible. Area, angle (pitch+yaw), spacing, shape (complexity+simplicity) and height are all variables it is difficult to juggle in two dimensions (which the surface of a model can be seen as). For this reason I used separate models for each scute in areas where I needed maximum control. To minimise confusion each is a separate polygroup which can be manipulated after generation by turning on automasking and transposing accordingly.